Space: It’s Not The Final Frontier 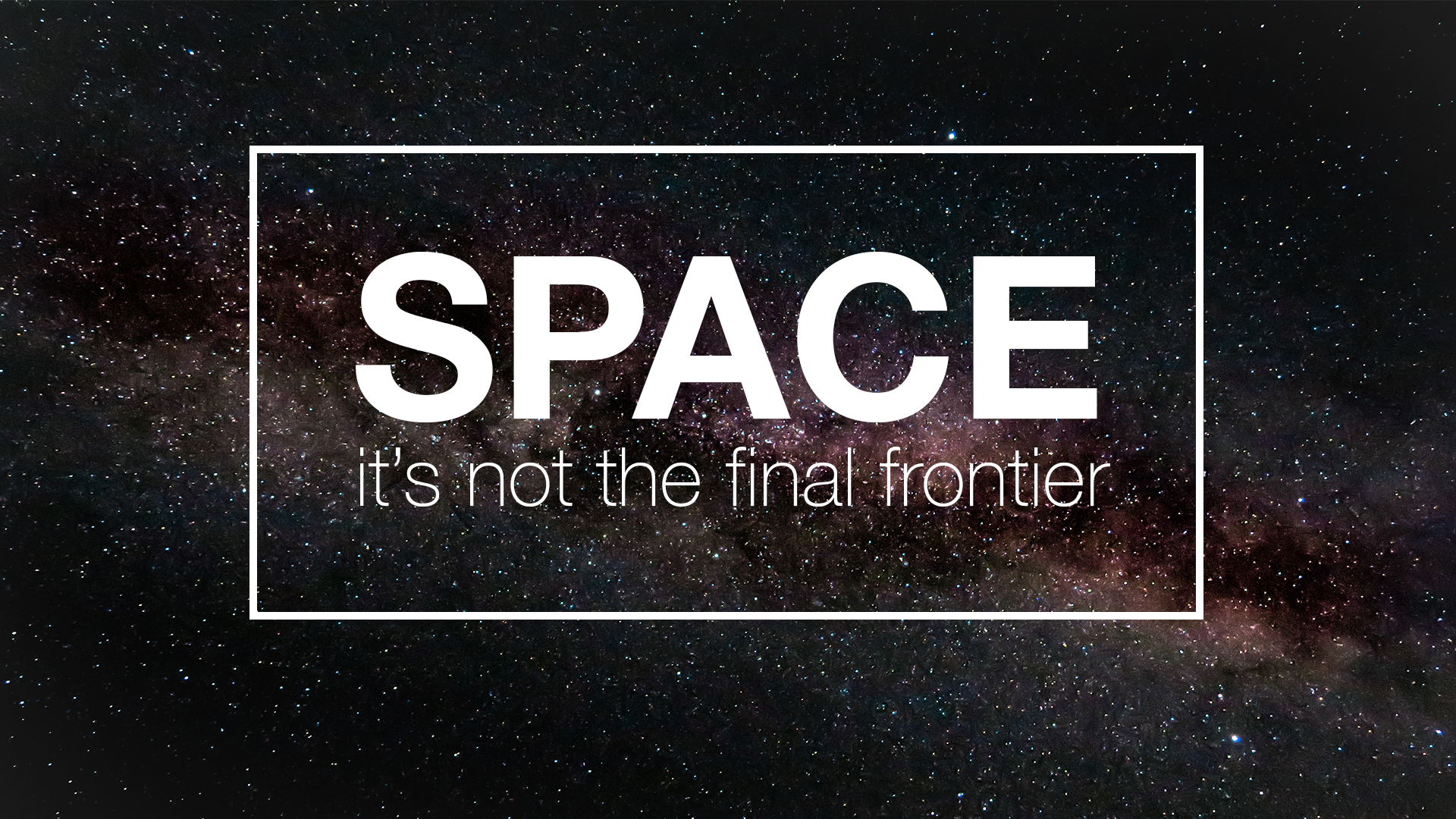 Sorry, my nerd is showing.

For as long as I can remember I’ve loved space. My dreams of becoming an astronaut were dashed when I got glasses in the third grade and then buried even deeper when I discovered rock and roll as a teenager. I still sit out on cool crisp evenings though looking at the stars and dream of the vastness of what’s out there. It makes me feel small, insignificant. It also brings this sense of wonder that even if extraterrestrials aren’t real, we’re not alone. We didn’t happen by accident. But, that’s not the kind of space we’re talking about here.

The thought of searching and exploring has propelled me into nearly all of the decisions in my ministry career. So, it’s probably no surprise that in the Fivefold survey, I’m an Apostle first, Evangelist second. “Let’s go. Let’s get it. Let’s make it happen… because people outside the church need to know that God is for them.”

It’s important to note that I’m not a teaching pastor. In fact, pastor/shepherd is so low on my list, it makes me feel bad. I’m a creative. I’m “the worship/artsy/designer/hipster/guitar player guy” (that’s how someone actually described me in a conversation last week). I’m part of the team that dreams up the use of the spaces we occupy to help connect people visually to the messages we’re putting out. I’m clearly no expert, as you’ll see if you keep reading, but we have picked up a few things along the way that will hopefully aid in your process of working with space.

There are multiple ways that space can help or hinder your processes. Let’s try to diagnose a few of them here.

And, be warned, there are probably more questions here than answers.

Looking at the New Testament is proof alone that location matters… that probably goes with out saying. Paul wrote all these letters helping churches in different areas reaching different groups of people. At Crosspoint, when we were moving out of the “portable plant” phase nearly three years ago we had some options in land purchase: Buy a field set apart where nothing is yet hoping things join the area or find some place in the middle of the community. We opted for the latter. We landed on a major thoroughfare backing up to a neighborhood near a cluster of schools in our community, not around many other churches. Since then, 4 relatively large churches have launched satellite/video venues in about a half a mile radius with the fifth planning to break ground this summer. Now we can get into the discussion about what that looks like to people outside of church community another time, but for the sake of the discussion of space/location, all of these churches (us included) want to be where the people are.

Cue Ariel from the Little Mermaid.

For Crosspoint, it drives us closer to our mission of communicating differently than the average church. We’re not looking for transfer growth. We’re trying to reach people that are truly turned off and disconnected from the church. That’s why we chose to be in the middle of the community, close to real life people with real life problems. In the middle of the mess.

When we were portable, the school was great for us… to a degree. But, we had lids all over the place.

Getting into our own building also has its lids:

There’s no right answer to any of these. Honestly, we’re still in flux on a lot of them. And, that’s OK. The process of removing the lids has to be.

Location Questions to Ask Yourself:

What lids (or hinderances) are accompanied by your location?

Are you accessible to the community? Do you want to be?

What does your location tell people about who you are?

When we moved into our current building, we were like most newly wed couples getting their first place together working on a shoestring budget. For our worship venue, we built the “black box” room and keep the lights down so that people have a sense of privacy when working though things. We regularly hear “I’m so glad the lights are down so people don’t see me cry.” But, we also hear “Can you turn the lights up? I can’t see.” fairly often as well. Either way you go can create a lid to a degree. Whichever side of line you choose to fall on (as far as lights, or sound, etc.) should be dictated by your mission… people will notice.

We upgraded some of our systems (sound, lights, screens, etc.) because of the 8 years of wear on our old gear. We could have put in more at the sacrifice of some other things. We kept our kids areas more hands on driven as opposed to presentational to keep kids engaged.

One of the big things we incorporated was a coffee/hangout/meeting space that’s available to the community. If I’m honest, we kind of missed the boat on this one to a degree. We have this great wide open space with tables and chairs, some comfy couches, armchairs, great coffee, and free wifi with a simple industrial feel. Too simple and industrial actually… it’s not as comfortable/inviting as we’d like for it to be. In trying to not overdo it, we under-did it. So, we’re fixing it. A coffee bar remodel, a plan to incorporate more than just drip coffee (like adding froufrou drinks made with espresso machines and blenders), incorporating varied textures and new furniture are just some of the things we have in queue to create a more inviting atmosphere.

Like everything else we go through seasons when the space is used regularly and times when it’s a ghost town. Changing the decor a little won’t solve that… but what things look like can be a lid.

Your building may be 100 years old and falling apart but your pastor drives a Land Rover.

You may have rad children’s areas and a worship venue that’s lack luster.

Maybe your lobby looks awful but you have the most killer lighting setup in your sanctuary.

No matter the condition of the space, what you sink dollars into is what people (and here I mean guests) are going to believe your mission is about.

I like the way Barna said it in his book Churchless: “The biggest issue is a perceived lack of value.” For right or wrong, perception is everything. People make snap judgments all the time about a thing, someone, or a group of people based solely on perception. That’s why my Irish grandfather always told me “you can tell a lot about a man by his shoes.” Perception changes the way we look at things. The condition of your space speaks volumes to guests about what’s important to you. And have you ever noticed how your own mess doesn’t bother you as much until you’re having guests over?

Using Crosspoint as an example, here are some of the perceived lids based on how we moved into our space”

These are all lids of perception. For most people, seeing is believing. So, shaping your environment to your mission becomes key.

Presentation Questions to Ask Yourself

What does your space look like and what does it communicate to a guest?

Are there easy, cost effective updates you can do to bring up the perceived value of your space?

Are you incorporating your mission into your decisions on space?

One afternoon in the last week or two of our building’s construction, 2 pastors from another church plant in the area walked in. I was sweaty and grimy as I had been helping with some installs prepping for our first service of our soft-launch to the new location. After a quick tour, the conversation went sideways.

“Well, congratulations. You’ve arrived.” One of them said.

“Yeah! You did it. You got into your own building. Isn’t that the ultimate goal?”

(Stares from all parties)

That pretty much ended the conversation. They thanked me and left… and no, this is not an exaggerated story. But, I think it displays a pretty common lid for anyone as they’re in the process of looking for a more permanent facility. It’s the “Field of Dreams” thought… “If you build it they will come.”

But, what are we connecting them to? A bigger building or a bigger purpose?

My grandfather that spoke of men’s shoes was an interesting guy. He had his pilot’s license and owned a small airplane for awhile (I’ve always wished I’d been able to fly with him). After he retired, he traveled the country in an RV with my grandmother for a few years before settling down in Arizona late fall through early spring. Then they’d pack up the Bounder and head back out repeating the cycle every year. Their travel schedule was like everything else in his life at that point. Balanced.

Much like landing that little cesna airplane, if we fall out of balance (one way or the other) trying to work out these lids, the effects can be disastrous.

If we focus on spending money to make things appealing, we increase the risk of unmanageable debt.

If we drive towards only focusing on the “church family” we tend to ostracize guests with insider language.

If we forget where we came from, then we tend to bend the truth to what we want it to say.

The great commission says “making more and better disciples.” At Crosspoint, we’re trying to find a balance for both. We know that attraction is important, but so is the depth. We tend to focus on the more side because of the burden we have for the “turned off by church” crowd in our community. We’re trying to shine a light down a different path by teaching truth in relevant terms and with intentional attraction elements (stage sets, music, popular media, etc.). Our space can’t do that. We make deeper disciples by getting people into community. Our space can’t do that. Our spaces are simply tools. When they’re looked at as anything more than that, that delicate balance gets disrupted.

Post contributed by PJ Towle. PJ Towle is the Creative Director at Crosspoint Church in Fishers, IN overseeing the worship, tech, and design teams with the greatest of ease. His teams have never had a scheduling conflict and their weekly rehearsals are finished in under 20 mins. When he’s on the platform he’s been known to break out a face melting guitar solo in the most awkward of places, yet for some reason it works. He rarely sleeps but when he does is able to recall his dreams with uncanny accuracy. He has a memory like a steel trap. The laws of physics do not apply to him. He can smell color. He’s the father of 2 children who listen to his every word with bated breath. His wife never, ever rolls her eyes at his jokes and thinks he’s actually the funniest person in the world. His vision is so good that he wears glasses to make it worse and his beard has been described as having a personality of its own. Plaid wears PJ to make a statement. On Saturdays he can often be found teaching underwater basket weaving to Olympic divers at the local YMCA when he’s not designing zero gravity rollercoasters. He’s allergic to pork but is “OK with it” because he doesn’t really like bacon. And, he likes tacos..