Back in May, I had the privilege of interviewing Ryan Sidhom, the lead pastor of River City Church in Vancouver, Washington (USA). As we explore creative, fresh expressions of the church, we thought his story and the church’s mission, vision, and rhythm were so inspiring that we needed to share it with you.

The Dream to Plant a Church

In June of 2016, Ryan and his wife, Clarissa, took a trip to Portland and began to tour the city in search of the area in which they would plant a church. Although they knew God was pulling them towards the Portland, Oregon area, the entire time they were there, nothing felt right. They then journeyed right outside of the city into Vancouver, WA. As the couple explored this city, they knew that “this was it!” They had found the place they would plant River City Church.

Returning home to Tennessee, planning got underway. Ryan and Clarissa worked to develop a prospectus, decided on the mission and vision of the church, and planned their departure from Tennessee and move to Vancouver. Their first day in Vancouver was May 1st, 2017. This husband and wife duo hit the ground running. As River City Church, they began making connections with people and learning more about the culture in Vancouver. What was discovered was that the prospectus created from the start didn’t make sense within the context of the community they were called to serve.

Ryan and Clarissa started surveying the people within the community. With willing hearts to serve and to meet the people where they were, what they discovered changed the way they would approach this fresh expression of church. Two items on the Community Survey stood out:

Why Do Church Differently?

I asked Ryan about how River City Church was different from other churches of which he had been apart. Ryan wanted to create a church that was more relational than attractional. That means putting relationships first. The beautiful thing that develops due to that priority is the church becomes attractional as more profound and deeper relationships form.

Ryan also realized early on that he was not there to bring the south to Washington. Instead, the whole purpose for being there was to bring Jesus, fully and completely. Ryan said they ended up adjusting everything they’d planned, except for Jesus. River City Church would require a vastly different rhythm to reach those away from Christ.

I love the mission of River City Church! The Mission Statement is:

The Tagline of River City Church is:

One of the many stories Ryan told me regarding the truth of the words above occurred at their Sunday gathering on May 5th, or Cinco de Mayo. With many cities and towns in America having higher rates of Hispanic migration, Ryan and Clarissa had already decided that they would have live Spanish translation available for their Hispanic neighbors during all gatherings. On this special holiday in Hispanic culture, the decision was made to flip the script.

When people gathered for the music and message on Cinco de Mayo, they were greeted with a Mariachi-style worship band. The entire service was in Spanish; therefore, the English speakers got the opportunity to wear the headphones feeding them the live translation of the message. After service ended, the entire church was met outside by a fantastic food truck serving tacos. The day was special for everyone involved!

Service is at the core of what happens at River City Church. From the very first day in Vancouver, they started serving the community as River City Church even though they hadn’t yet launched their first service. In fact, the official launch of Sunday services was Easter Sunday of 2019. This launch was two years after the move to Vancouver!

Ryan talked to me about the importance of serving without expecting anything in return. One story he told me was about a local public elementary school there. He had reached out to the principal hoping to support the needs of teachers and students. Initially, the principal would hardly enter into discussions with Ryan as Separation of Church and State is a prominent value in Vancouver, WA.  As the church began meeting the needs of those in that school, over time, the principal’s heart softened. This year River City Church was able to host a giant Easter Egg Hunt on the property of that school where they were able to meet and serve over 600 people!

It was refreshingly apparent in my conversation with Ryan that the most important voice he listens to when thinking of mission and vision for his church is that of the Holy Spirit. There is a Sunday to Sunday rhythm that River City Church follows that is different from any other church I’ve encountered. I would even call it a brave leap of faith. Each month, they follow this Sunday Schedule:

Would having this type of rhythm in your church be scary? With this church rhythm, a pastor would have faithfully risk relinquishing a lot of control. Ryan, who self-admittedly is a bit of a control freak, has had to adjust to the freedom of prayerfully letting go. He has to be able to trust those he’s discipled who are speaking on the Sundays he isn’t. He has to train up and trust his volunteers on the Serve and Play Sundays when the entire community is invited to be served and to have fun. Ryan and the whole team at River City Church have to be willing to get their hands dirty and commit to engaging the daily lives of those far from Jesus no matter how messy the lives of those people.

River City Church has a courageous vision. Their goal is to plant 32 churches in 20 years. Due to those aspirations, the church is keenly aware of the need to develop and mature believers into leaders and leaders into future pastors. You can see this vision coming to life within the rhythm of the church where on the 3rd Sunday of the month, a future church planter delivers the message. 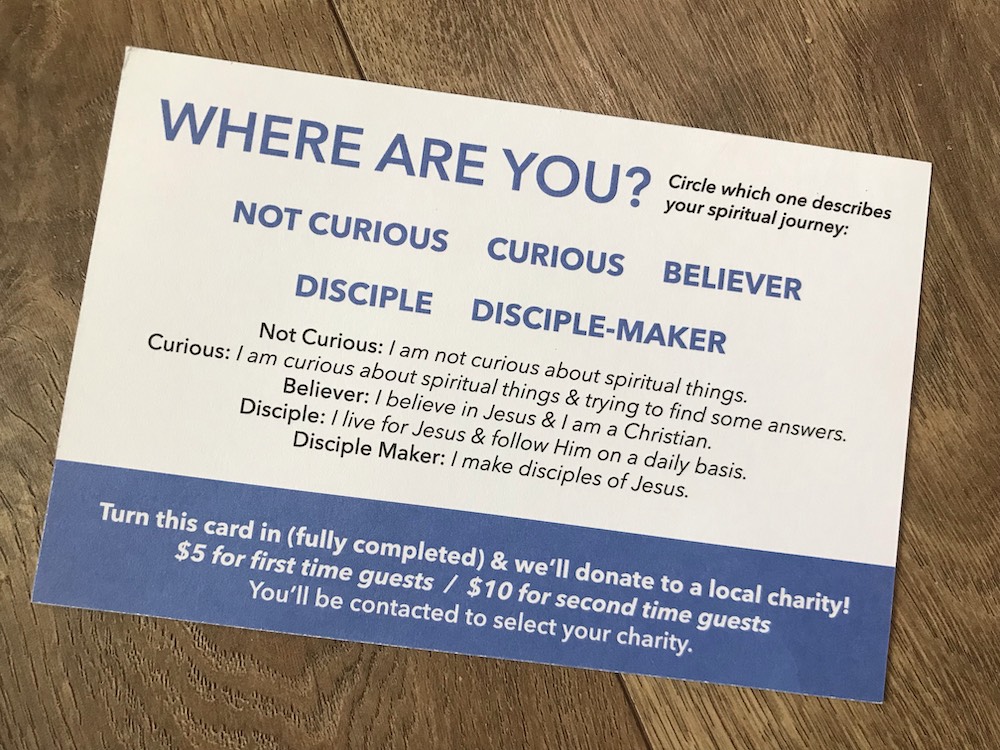 River City Church also aspires to be a church that is “Marked by Generosity.” A great example of this is what they do with their visitor cards. Many of us likely have a mug, t-shirt, pen, or cup from a church we once visited with a friend. But when someone new comes to River City and fills out the visitor card, that person gets to choose a charity they would like to support. The church then donates $5 to that charity. But wait. There’s more! When that visitor returns for a second time, the church donates another $10 to that charity! (Also, take note of the “Where Are You?” section where individuals can indicate where they are on their spiritual journey, all the way from “Not Curious” to “Disciple-Maker”).

Dedication to People and Small Businesses

A significant part of the vision for River City Church is its dedication to people and small businesses in the community. Ryan says it this way, “The Gospel doesn’t just redeem people, but it has the power to redeem entire communities!” He believes that the church should be friends with and support those running small businesses in the community. This concept has already made a significant impact even before the church officially launched earlier this year. One local business is a bubble tea shop. The owner there has seen the value River City Church has brought to the community through service and support. Though she is not a follower of Jesus, she has become a monthly supporter of the church!

“The Gospel doesn’t just redeem people, but it has the power to redeem entire communities!”

The church’s vision of supporting and reaching the community is so big that even though the church had the fortune of inheriting the building where gatherings now take place, one of the first things they did when moving in was to vacate the office area there. The official office of the church can be found out in “the public square,” or the local coffee shop.

So as you’ve read through pieces and parts of River City Church’s story, what do you do with that information? Are there risks you’ve been dreaming about taking that you’ve pushed to the side? I encourage you to genuinely listen to what the Holy Spirit is saying to you. We know statistics indicate the church in America is on a sharp decline. We take hope in the truth that there is fresh Spirit-infused creativity that we must tap into to see the Church not just survive but thrive in the decades to come. And we do this not for our fame or glory but the glory of Jesus Christ!