One Pastors Prayer, and a Found Dog 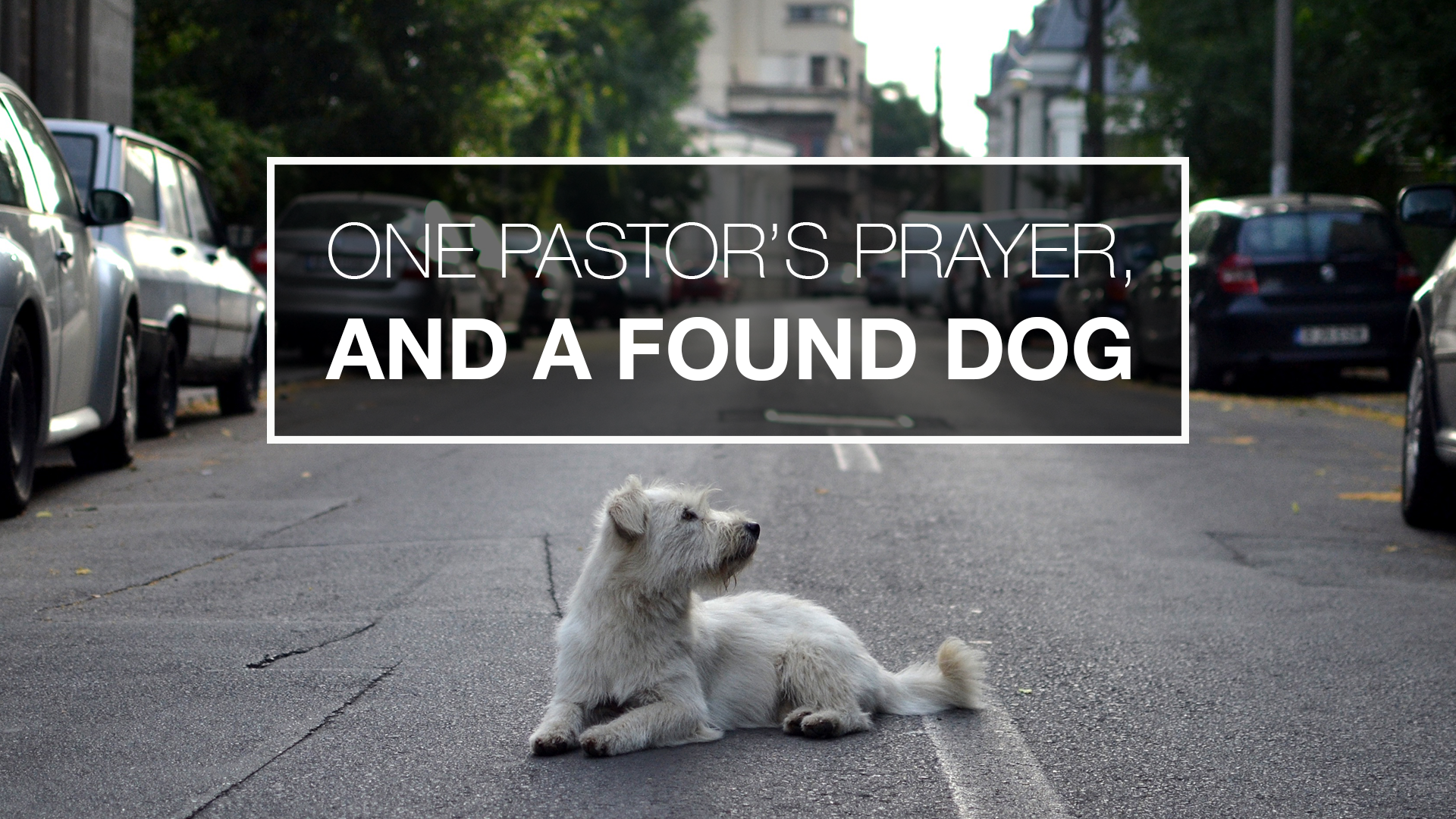 Shortly after our consultation at Friendship Church in October of 2015 pastor Nathan Heady felt challenged to meet and serve the neighbors around Friendship. He began to pray over specific houses in the neighborhood surrounding the church. He prayed that their lives would be touched by Friendship. Earlier this month, Nathan emailed our team with the story of how God answered those prayers:

“A large dog was lost on the main road by the church. This road is highly trafficked, and I remember looking outside the window and thinking, ‘Man that dog is toast.’ I came out to see if I could get the dog, and a guy came flying down the road and almost hit it. He came to a screeching halt and when he did, he yelled out the window to me that the dog was all over the neighborhood and instructed me to find a way to corral this dog. As the guy drove off, I ran over and finally chased down this 100 lb dog. I found a way to get it over to my truck and got it into the bed of the truck. I looked at the collar and on the tag was a phone number, so I called it. A man answered the phone and was shocked when I told him the dog was loose. He told me to hold him there, if I could, and he would drive there as fast as he could to get the dog.

15 minutes passed and an older gentleman pulled into the parking lot and jumped out of his truck to get the dog. He was so apologetic, and kept saying how much he appreciated me holding the dog there. He asked why I would do such a thing, that people don’t do stuff like that anymore. He even offered to pay me! ha. I asked him where he lived and he told me his name was Landon and he had just moved into one of the houses I had been praying over. The family I had known in that house had moved out, and they just moved in. I told Landon that I did what I did because we were called to love our neighbors, and that we loved them already and wanted to serve them. He was so thankful and then gave me the dreaded ‘Pastor, you will probably see us in service soon.’ I told him how great that would be and then said goodbye. I muttered under my breath, ‘you’ll never come’, because how many times do we hear that phrase and they don’t come.”

Nathan was excited by this interaction with a new neighbor and shared his story with Jeannette, who had been a part of the consultation. She said, “Well Pastor, it looks like you need to keep dog hunting.”

Nathan continued in his story to us: “That became a slogan here at church, ‘let’s go dog hunting for people.’

6 weeks went by, and they didn’t come to church. I wasn’t surprised. One Sunday, I was running around trying to get ready for service and one of my greeters came up to me and said ‘Preacher, there is a man in the worship center that wants to talk to you. He said he is the dog man.’ I ran into the room, and found Landon and his wife Donna sitting in one of the rows. I greeted them and with tears in their eyes they said how much it meant to them that I would save their dog, and he wanted to honor his statement.

18 months later, they were regular attenders here at Friendship. They attended most Sundays, and even plugged into one of the life groups that met in their neighborhood this past fall. They came to our Super Bowl Party and I sat with them and we had a great time. We really bonded.

6 weeks later, Donna was rushed to the hospital with shortness of breath and pain in her chest. Within a week, she was diagnosed with stage 4 lung cancer. This was a huge shock to the family, and a blow to our church as well.

After returning home from Orlando in late April, I received word she was taken back to the hospital and had hours to live. About 12 people from Friendship gathered around her bed Friday night. Surrounded by her grieving family we said our goodbyes and prayed for her transition from life to eternity. Landon stood there with all of our group, and said ‘This church has done everything you said they would. You have loved us more than anyone ever has. Every time someone from Friendship reaches out to us we fall in love with the church even more.’

I looked at Landon, with tears in my eyes and said, ‘Landon, it all started with a dog, didn’t it?’ He laughed, and said, ‘Pastor, that dog led us to Friendship.’”

The day after Nathan shared this story with HGC’s team Nathan told us the tragic news that Landon had died in a car crash just outside of his home the night of the visitation for Donna. Nathan was at the church at the time and heard the crash,

“I saw a ton of emergency vehicles speed by and for some reason I knew it was Landon. I ran out of church and took off down the road and found out he was killed. I immediately talked my way through the police barricade and got to their adult children and spent the afternoon with their four kids, two with severe special needs, and the widow of the best friend helping them through this tragedy.”

Later that week Nathan and another pastor had the duty to prepare a double funeral, to lay to rest two dear friends and minister to their now orphaned children. As Nathan was talking with the children, the same dog bounded up to him and Nathan was able to share with their children exactly how he had met them.

The day of the funeral was deeply emotional for Nathan, “It was so surreal. Packed out funeral home, standing room only. Two caskets, angled next to each other in the front of the room. Their mid 20’s-30’s children made up the first row, now trying to grasp at any understanding of what has happened and what they do next.

As tragic as this was, you can imagine how painful this service was. It was very emotional. It was my turn to speak and I shared some memories of both, but I did two key things. 1. I shared about the dog… how that dog was the connection piece. It was a story that the children could relate to because they understood how important that dog was to our relationship with their family. 2. I played an audio file of their dad sharing his testimony at church last year, and about how he offered forgiveness to people who hurt him because his heavenly father forgives him…The last line of his audio was ‘and I am now right with my Father.’ What a testimony to leave for his children and all the people packed in this room. This was almost too much for his kids to handle but it needed to be heard.

A young couple from Park West had been delaying trying out Friendship but finally did on Easter Sunday. They have been back twice since and are fired up about the church. The husband came up to me after service Sunday and had tears in his eyes. He said ‘Pastor, that dog is exactly how we got to know Landon and Donna too. That dog came into our yard and we held onto it until they got home. We have been friends ever since, and hearing his story today really hit home.’

I stopped in my tracks…You see, Landon was saved when I met this dog, but they were needing a church home. He had been struggling in his faith a bit, and we had a big part in helping him stay on course. In his death, He planted a seed of faith not only at his funeral, but with a neighbor that he came to know through this dog.

This dog wasn’t just about connecting us to Landon, but connecting Friendship and God with others in the community we have been trying to reach for YEARS.

In the midst of terrible grief, which is still taking it’s toll on us, we can look and see God’s handiwork through a white and gold dog that has a tendency to get lost.

But when He is found, so are God’s children.

Who knows how much impact this dog has had on our community, but I am stoked to find out and keep meeting the people God has impacted through this dog and my friends Landon and Donna.”

Over the past month we have been sharing with you our dream to see 1,000 Healthy Churches. This is our dream because we have seen the power that one healthy church, one healthy pastor, one healthy neighbor can have on the kingdom. This journey began after Nathan felt challenged to pray over specific houses in the neighborhood beside the church. We wanted to share this story with you, our champions, to encourage you in your ministries. Whether you are a pastor, or just a neighbor, you may never know how one prayer, and one small action can effect the kingdom. As Nathan stated, “we can look and see God’s handiwork through a white and gold dog that has a tendency to get lost”.

“We ourselves feel that what we are doing is just a drop in the ocean, but the ocean would be less because of that missing drop.” – Mother Teresa