A tale of two churches, one without a coach and one with a coach. Tale One In the summer of 1994, my wife and I courageously moved to Cincinnati, Ohio to launch a new church. It might be hard to imagine these days, but the plethora of resources that exist […] 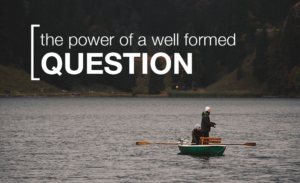 Coaching: The Power of a Well Formed Question

If you have coached pastors or church leaders any length of time you know well the tension that exists between coaching and telling.  Coaching in its purest sense is pulling out the best in those God has entrusted into our care.  Coaching that resorts to simply telling or offering our […]

In relationships that really matter, such as spouses, friends, clients, and significant others, listening skills can make or break the relationship. Listening deeper is possible and can have significant impact.

It’s About The Journey

In the last year and a half, Bob Shallenberger has begun living in a different way. His values haven’t changed but his ability to be ‘on mission’ has. When a new task or project comes across his desk, he asks himself when doing this project, will he be Exemplifying Servanthood. If the answer is yes, then he knows he is doing something that is a part of God’s purpose for his life. Bob is an “On-Purpose” person.

You can’t have success in ministry without trust. The word trust embodies almost everything you can strive for that will help you to succeed in building up the body of Christ and transforming a community for Christ.

What if I am found wanting?

What if I am found wanting?
That’s the question Bill Greiner of Eagle Ridge Church of God found himself asking as he and his church prepared for their consultation weekend with HGC last year.

What distinguishes coaching from mentoring, consulting, counseling, therapy or even teaching?
Coaching is partnering with clients in a thought-provoking and creative process that inspires them to maximize their personal and professional potential.

Today, I spoke with Ryan Carrell, founding pastor of the Southeast Project, a church on the southeast side of Indianapolis. I tried for two weeks to connect with Ryan to hear about their recent 3-year anniversary. As a church planter in a portable church, he has many irons in the fire. When I finally caught him, he so honestly shared some of what was keeping him busy—he was releasing Southeast.

How Healthy is Your Culture

I believe that one of the primary, if not THE most important, responsibilities of leadership is to create a CULTURE of health and vitality.